“When the economic well-being of their nation demanded a strong and creative response, my colleagues at the Federal Reserve, policymakers and staff alike, mustered the moral courage to do what was necessary, often in the face of bitter criticism and condemnation. I am grateful to all of them.” Ben S. Bernanke 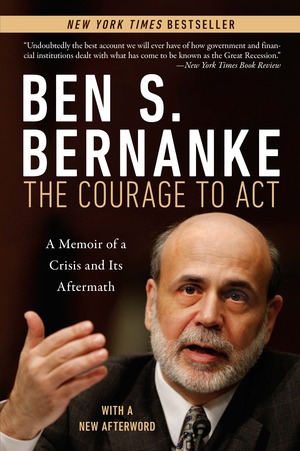 Now available in paperback with a new afterword.

An unrivaled look at the fight to save the American economy.

“Undoubtedly the best account we will ever have of how government and financial institutions dealt with what has come to be known as the Great Recession.” —New York Times Book Review

A Financial Times Best Book of 2015

In 2006, Ben S. Bernanke was appointed chair of the Federal Reserve. There would be little time to celebrate. The bursting of a housing bubble in 2007 exposed the hidden vulnerabilities of the global financial system, bringing it to the brink of meltdown. In this New York Times bestseller, now updated with a new afterword in the wake of Donald Trump’s election, Bernanke tells the inside story of how his team at the Fed fought the crisis with every tool at their disposal to prevent an economic collapse of unimaginable scale.

“A fascinating account of the effort to save the world from another [Great Depression]. . . . Humanity should be grateful. ” —Financial Times

“A careful, detailed, and exceptionally clear justification for the Fed’s aggressive actions to avert another Great Depression and resuscitate the American economy. ” —Washington Post

BEN S. BERNANKE served as chairman of the Federal Reserve from 2006 to 2014. He was named Time Magazine’s Person of the Year in 2009. Prior to his career in public service, he was a professor of economics at Princeton University.

Ben Bernanke: More execs should have gone to jail for causing Great Recession
- USA Today The former Fed chair has a memoir, plus breaking the higher-ed monopoly and a plan to squeeze Putin.
- WSJ Ben S. Bernanke: The central bank did its job. What about everyone else?
- WSJ

Download the Notes from The Courage to Act (.pdf)